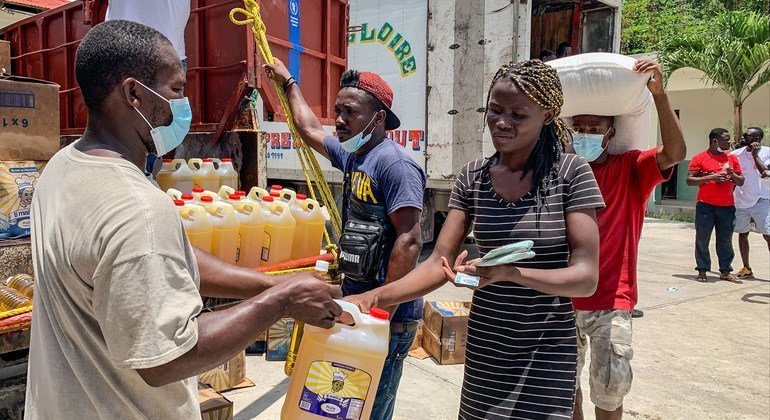 The funding will be used to help Haitian authorities with housing, temporary shelters, mental health support and COVID-19 prevention in the aftermath of the disaster, which left 2,207 dead and over 12,000 injured, according to official figures. Almost 53,000 buildings collapsed, while 77,000 others were severely damaged.

❗At least 137,000 families were made extremely vulnerable by the recent earthquake that hit southern Haiti.

The magnitude 7.2 earthquake struck on August 14, the latest crisis in a country where nearly half of the population, or 4.4 million people, already struggled to eat. A few days later it was followed by Tropical Storm Grace which brought heavy rains, flash floods and landslides.

Only 48 hours after the earthquake, IOM had set up bases in each of the worst affected areas. The agency now has additional hubs in the towns of Jérémie, Les Cayes and Miragoane.

Stressing that information management was also a priority, Ms Cecchet said that the appeal funds would also be used to generate timely and accurate information on displaced people in the departments of Sud, Grand’Anse and des Nippes.

Meanwhile, an IOM team is monitoring the movements and needs of affected populations and mapping the conditions in the shelters, with the aim of facilitating humanitarian programming, and prioritizing the tasks carried out by aid partners, such as the selection of beneficiaries, logistics planning and identification of the specific needs of these people. in a vulnerable situation.

IOM also wishes to provide mental health care and psychosocial support to families, with a particular focus on women and girls. Psychologists trained in Protection from Sexual Exploitation and Abuse (PSEA) will be available on site, and IOM will also set up a dedicated toll-free hotline for those who cannot receive or directly access assistance.

As insecurity has hampered the delivery of aid to some affected communities, the agency plans to implement what it called “local and sustainable initiatives” to ensure that aid reaches those who need it. need it most.

“IOM’s community stabilization approach emphasizes flexibility and responsiveness to changing needs,” Ms. Cecchet said. “Cash-for-work has also proven to be effective during a crisis, laying the groundwork for lasting solutions and helping stabilize the community,” she added.

Last Friday, UN Deputy Secretary-General Amina Mohammed concluded a two-day mission to Haiti, where she was struck by the “incredible resilience” of its people.

Ms. Mohammed also reiterated the UN’s support for the country, saying: “We are here in solidarity with Haiti and are impressed by the incredible work that national authorities and UN agencies are doing to help in these difficult times.