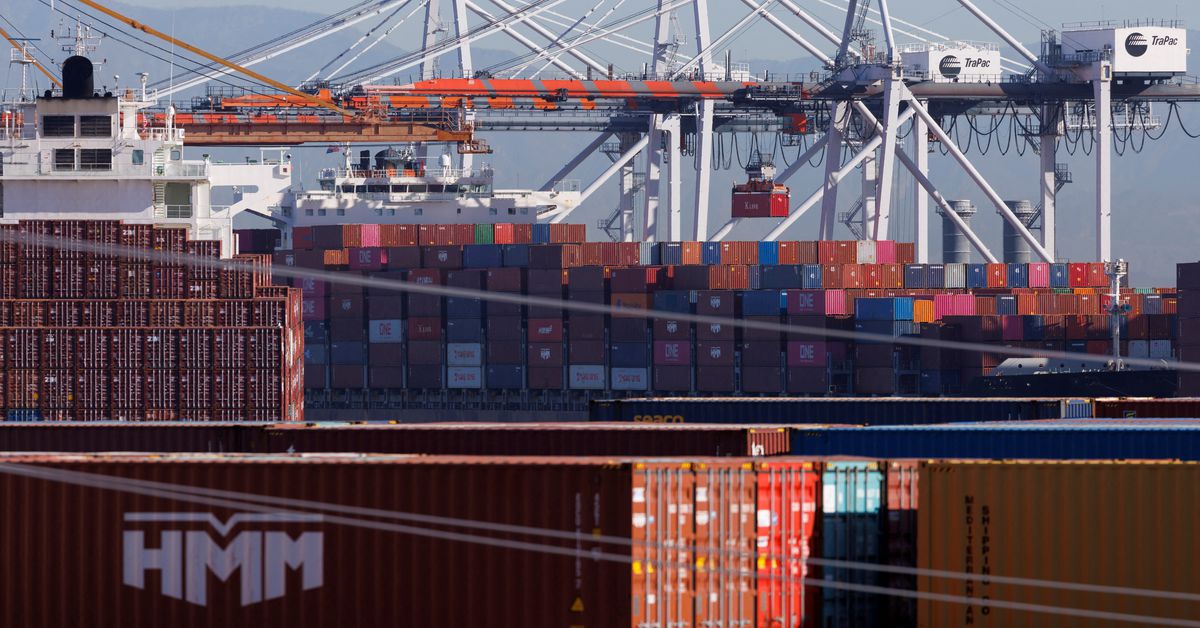 Stacked containers are shown as ships unload their cargo at the Port of Los Angeles in Los Angeles, California, U.S. November 22, 2021. REUTERS/Mike Blake

The pace of inventory accumulation announced by the Commerce Department on Monday, however, was slower than in recent months. That, combined with the soaring goods trade deficit, prompted Goldman Sachs economists to lower their estimate of gross domestic product growth for the first quarter by 0.5 percentage points to an annualized rate of 1.5%. .

The economy grew at a 7.0% pace in the fourth quarter, with inventories contributing 4.90 percentage points.

“We remain on track for another strong gain in real business inventories in the first quarter, although inventories may end up being quite close to a neutral factor for GDP growth given that inventory accumulation in the fourth quarter was also substantial,” said Daniel Silver, an economist at JPMorgan in New York.

The goods trade deficit jumped 7.1% to an all-time high of $107.6 billion last month. Imports of goods rose 1.7%, led by food and motor vehicles. Imports of industrial supplies, equipment and consumer goods also rose sharply. Imports of other goods, however, fell 15.3%.

Exports fell 1.8%, dragged down by consumer goods, motor vehicles, food and other goods. But exports of capital goods and industrial supplies have increased.

Trade has weighed on gross domestic product for six straight quarters. Economists have seen a limited impact on trade from the Russian-Ukrainian conflict, which led to the United States imposing the same trade sanctions on Moscow. Russia accounted for just 1% of imports and about 0.4% of exports last year, according to government data.

“As the Russian invasion of Ukraine drives energy prices up sharply, its implications for trade flows will be less noticeable,” said Mahir Rasheed, an economist at Oxford Economics in New York. “Russia and Ukraine account for less than 1% of monthly import volumes and an even smaller share of US exports, so the war has little bearing on trade prospects.

U.S. stocks traded lower as investors weighed the fallout from a series of Western sanctions imposed on Russia. The dollar appreciated against a basket of currencies. US Treasury yields fell.

Retail inventories rose 1.9% after jumping 4.7% in December. They were supported by a 2.4% increase in motor vehicles, which followed a 7.0% surge in December.

Motor vehicle production remains constrained by a global shortage of semiconductors. Excluding motor vehicles, retailers’ inventories rose 1.7% after rising 3.9% in December. This component enters into the calculation of GDP growth.

Investment in inventories rose at a seasonally adjusted annual rate of $171.2 billion in the fourth quarter, one of the largest in years. Growth estimates for the first quarter range from as low as 0.6% to as high as 5.4%.

“Because of the way GDP is calculated, it would take a similar sized expansion in inventory to contribute to this level of growth,” said Matt Colyar, economist at Moody’s Analytics in West Chester, Pennsylvania. “We don’t expect first-quarter construction to top record fourth-quarter construction. As a result, we expect inventories to subtract 0.3 percentage points from GDP growth.”

Restocking, after three consecutive quarters in which inventories have been reduced, is supporting manufacturing.

A Dallas Federal Reserve survey showed on Monday that factory activity in Texas continued to expand in February, albeit at a slightly slower pace. The survey’s production index, a key measure of the state’s manufacturing conditions, fell two points to 14.5.

A reading above zero indicates manufacturing growth in the region. Despite the moderation in activity, factories recorded strong growth in new orders and were optimistic about economic conditions. The survey’s general business activity index climbed 12 points to 14.0.