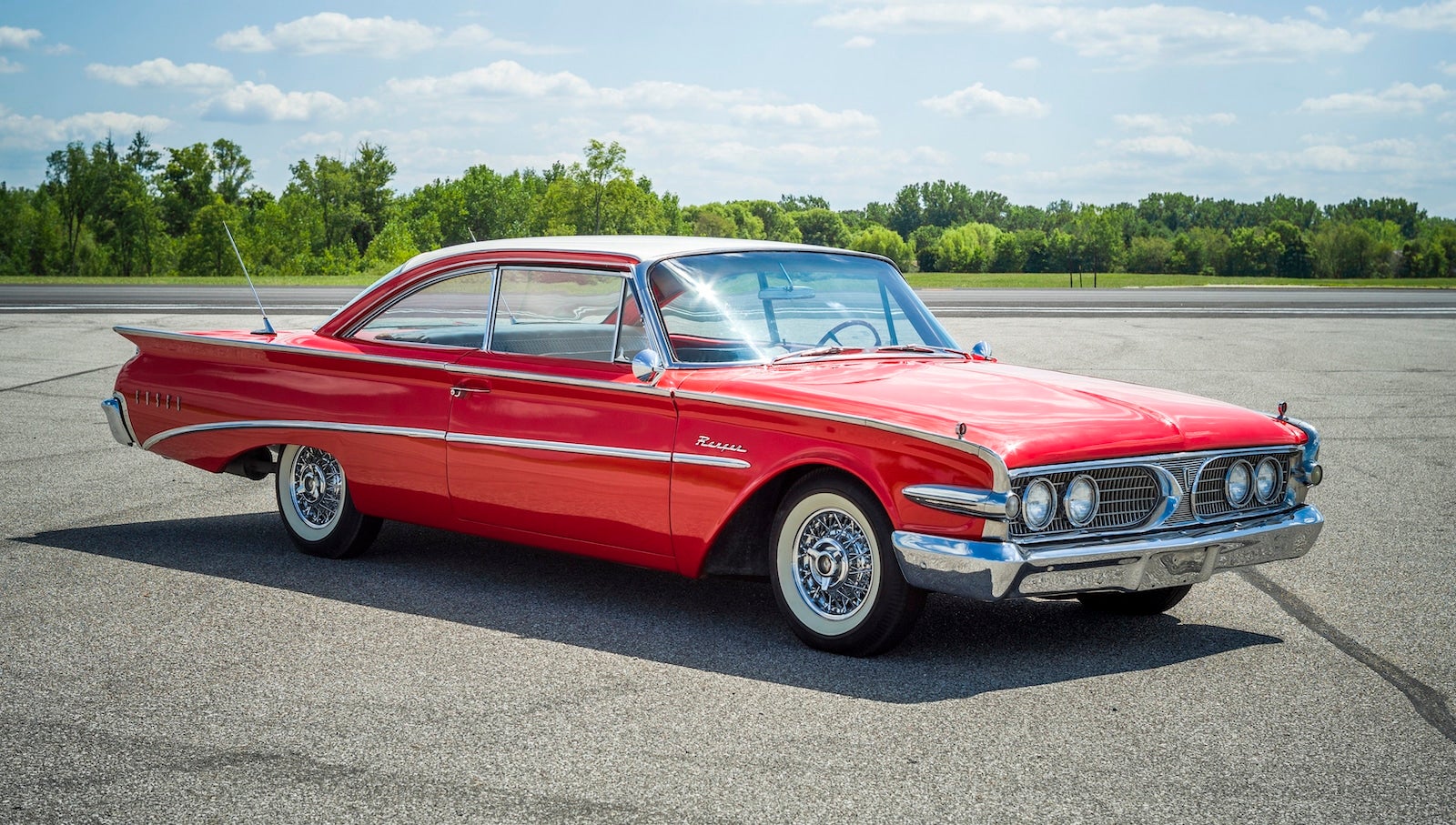 This week in 1959, the Ford Motor Co. announces the discontinuation of production of the Edsel. Named after the late father of Henry Ford II, the company spent 10 years and $250 million planning. Offered in 18 models, it arrived just in time for a recession, causing a rising tide of interest in compact cars, not mid-priced ones.

And while the story is well known to car collectors, its failure came as two different factions battled for control of the automaker.

To understand why it failed, we have to go back to 1948, when planning for the Edsel, known internally as the E-Car – for Experimental – began to take shape.

Having been discharged from the Navy to shore up Ford Motor Co., Henry Ford II knew a change was needed – the company was estimated to be losing $10 million a month. But no one knew exactly how many; the company estimated its accounts payable by weighing invoices on a scale.

Despite his lack of experience in these areas, Henry II, 27, sought to bring in those who did. He hired The Whiz Kids, 10 MBA-educated Air Force statistical control officers who joined Ford as a group in 1946, using their expertise in applying statistical techniques to management problems.

With the financial side handled, Henry II turned his attention to manufacturing, bringing in a rising General Motors executive, Ernest Breech, to join the company as executive vice president. Having earned a reputation as a troubleshooter at GM, Breech set to work, bringing in a number of talented GM executives who helped Ford turn a profit of $66 million the following year.

But Henry II had put together a management team of bean counters, led by the Whiz Kids, and product men, led by Breech. As the 1950s dawned, Chevrolet, Ford, and Plymouth accounted for half of all sales in the United States. GM’s Buick, Oldsmobile and Pontiac grabbed another 25 percent.

The remaining brands share the rest. In 1954, Ford faced a problem. Research found that 87% of Chevrolet owners have switched to a Pontiac, Oldsmobile or Buick; while 77% of Plymouth owners bought a Dodge, DeSoto or Chrysler. Yet only 26% of Ford owners went on to buy a Mercury.

At this point, Ford was expanding its product line through Breech’s influence. Ford had introduced the Thunderbird, bringing glamor to a boring brand and boosting sales for the brand as a whole. The company was developing a new Continental, part of an ultra-chic luxury car to take on Cadillac, while Lincoln was repositioned to take on more expensive Buick, Oldsmobile and Chrysler models. But there was still a hole in the line-up. Ford had one mid-priced brand, Mercury, while GM had three and Chrysler two. Perceiving a gap, Ford’s new E-Car would be developed to fill it.

When it came time to style the car, Roy Brown, who was in charge of styling the car, was asked to give it a unique identity. With most new cars sporting horizontal grilles, Brown thought of the pre-war vertical Nash, LaSalle and Packards – and wrote an updated version. When Breech saw it, he found it too thin and asked for it to be enlarged and raised. When the prototype was first revealed to executives, they cheered. The car was approved for production.

In the meantime, Bill Schmidt, a member of Edsel’s design team, left Ford and joined Packard. Realizing what Ford was up to, he developed a comparable styling concept, the Packard Predictor, which debuted at the 1956 Chicago Auto Show. Its styling was widely praised and the new E-Car seemed destined for success.

Above the cylinder head

Then came the time for a name. Ford had spent a lot of time deciding on a nickname for his new line, calling on poet Marianne Moore for help. She suggested Civic Monogoose, Turcotinga, Bullet Cloisonné and Andante Con Moto, among others. At a board meeting, in the absence of Ford family members, Breech suggested Edsel, the late son of Henry Ford. When they found out, the family was appalled, but somehow the name stuck.

But things were changing at Ford. Louis Crusoe, a former colleague of Breech at GM who championed the first Thunderbird at Ford, has been replaced as head of the division by Robert McNamara, a Whiz Kid whose colleague ran Mercury. This would ultimately hamper development of the Edsel, as the advanced features originally envisioned for the car would be dropped, even though marketers proclaimed the future car would be truly revolutionary. The problem was that it wasn’t.

When it arrived in 1958, it was offered in Ranger and Pacer trim on Ford’s 118-inch, 303-hp wheelbase, or Corsair and Citation trim on Mercury’s 124-inch, 345-hp wheelbase. Options included a push-button transmission in the steering wheel hub, a drum speedometer and numerous electrical accessories.

But what the automaker hadn’t counted on was a recession, a recession that reduced market share for mid-priced models to 18% from 25% in 1958. The Edsel’s timing proved ruinous , arriving in time for a recession, causing a rising tide of interest in compact cars, not mid-priced ones. It was just a problem that would destroy his chances of success.

Another issue was that consumers found it unattractive, comparing its horizontal grille to a toilet seat. Mockery ensued, which does little for word-of-mouth publicity.

Finally, quality control proved to be a real problem. The Whiz Kids’ rise within Ford had led the company to decide that Edsel would not have its own assembly plant. Instead, every 60e work on the assembly line would be an Edsel. As a result, quality suffered with Ford establishing a special operation at its Norfolk, Virginia plant where the plagued issues would be resolved and reassembled before shipment.

Sales proved decent, totaling around 63,000 units in the first year. But Ford expected to move more than three times that number. The company quickly regrouped, shrinking the 1959 to a single 120-inch wheelbase with the choice of a 145 hp inline-6 ​​or a 200 hp V-8. Styling has also been softened and the most objectionable feature of the grille has been diminished. Still, the Edsel looked like little more than a revamped Ford, which did little to help sales, dropping to 45,000 units.

As the recession continued, consumers ignored the Edsel, adopting smaller cars such as the Nash Rambler, Studebaker Lark, and a number of imports, primarily the Volkswagen Beetle. At the dawn of the 1960 model year, Ford had only 3,000 Edsel orders on hand.

This week in 1959, Ford Motor Co. killed the Edsel, a car that became famous for its ugliness. Ironically, Edsel Ford was celebrated for his design prowess and good taste, something the car that bears his name never had.

Despite interference from Ernest Breech, Roy Brown took the fall for the design. He was sent to England, where he designed the wildly successful 1962 Ford Cortina before returning to America where he designed the 1967 Ford Econoline. Robert McNamara would join the Kennedy administration as Secretary of Defense, while Breech would become chairman of Ford’s board of directors from 1955 to 1960. He remained on the board until 1967. Upon his death in 1978, Henry II described Breech as “a company leader of extraordinary talent and energy who made a major contribution to the post-war revitalization of Ford Motor Company. … I’ll miss him.

It would take Lee Iacocca and the success of the Ford Mustang to rekindle Ford’s willingness to take risks.