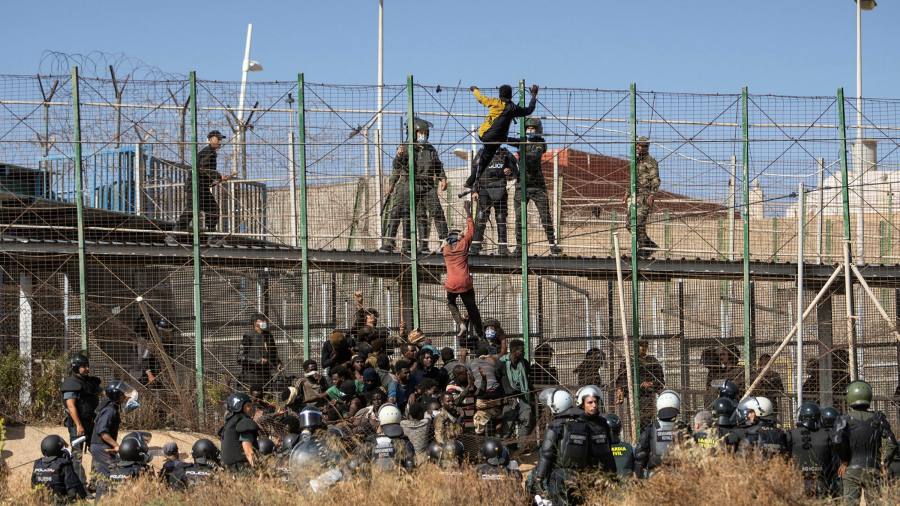 Human rights groups have called for government investigations after more than 20 people died when around 2,000 migrants tried to cross the perimeter fence separating Morocco from the Spanish enclave of Melilla.

The migrants, mostly from sub-Saharan Africa, attempted to scale a fence topped with barbed wire on Friday, sparking violent clashes with Moroccan police and Spanish security forces around the territory’s perimeter on the North African coast.

Morocco said 23 migrants were killed and dozens injured in what it described as a “scramble”, with some crushed and others falling from the top of the fence. The Moroccan Association for Human Rights (AMDH) reported 29 dead, citing local medical officials.

The deaths mark the most serious incident in Melilla, which along with Ceuta, another Spanish enclave on the Moroccan coast, has attracted thousands of African migrants trying to enter Europe over the past decade.

Spanish police estimate that more than 13,000 immigrants crossed the Mediterranean from Morocco to Spain last year.

More than 140 police officers, mostly Moroccans, were also injured, five of them seriously, in the two-hour standoff between young male migrants, some armed with sticks and stones, and security forces in anti-terrorism gear. riot who fired tear gas into the crowd.

Video footage, which AMDH says was shot by members and supporters, shows dozens of migrants lying on the ground near the border fence with Moroccan security forces standing above them. Many appeared injured and some were apparently lifeless.

Pedro Sánchez, Spain’s prime minister, blamed “mafias that traffic in human beings” for what he called “a violent and organized attack” on the Spanish enclave. He said Spanish and Moroccan police cooperated to “repel this violent attack”.

Esteban Beltrán, director of Amnesty International in Spain, called on the Spanish and Moroccan authorities to “promptly investigate the serious human rights violations” that have occurred “on both sides of the border”.

He said Amnesty had seen footage showing Moroccan security officers using “excessive force against migrants and refugees”, claiming they were using “batons to beat people who were already totally under their control and who offered no resistance.”

Beltrán also accused Spanish authorities of forcibly deporting migrants from Melilla, a practice which he said is prohibited under international law as it prevents potential refugees from applying for international protection.

He said most of the migrants trying to enter the Spanish enclave were fleeing the conflict in South Sudan and should be treated as war refugees. “It is essential to create a legal and safe pathway for people to seek asylum,” he told reporters.

Human rights organizations in Morocco have also called for an investigation.

Morocco has at times turned a blind eye to migrants attempting to storm border fences in Ceuta and Melilla in order to pressure Spain over its position in the disputed territory of Western Sahara.

Friday’s massive attempt to enter Melilla was the first since Spain set out to mend frayed diplomatic relations with Morocco by announcing last month that it supported Rabat’s plan to offer autonomy to the Sahara. West under Moroccan sovereignty.

The UN has tried unsuccessfully since the 1990s to hold a referendum to determine whether Western Sahara should become independent or part of Morocco.