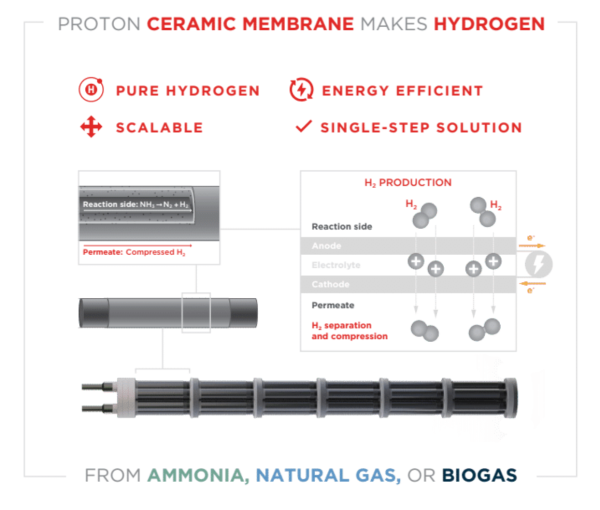 A team of researchers from CoorsTek Membrane Sciences and SINTEF in Norway, and Universitat Politècnica de València in Spain, demonstrated a well-balanced 36-cell proton ceramic reactor stack enabled by a novel interconnect that realizes complete methane conversion with over 99% recovery to pressurized hydrogen, leaving a concentrated stream of carbon dioxide. The team also demonstrated that the process can be scaled up for commercial application.

An article on the work is published in the journal Science.

This figure shows the principles of the new ceramic membrane used in the production of hydrogen. Figure reproduced by kind permission of CoorsTek Membrane Sciences.

Currently established methods have energy efficiency ratings between 70 and 75%, but our approach has a potential efficiency of 90%. The end product is compressed hydrogen with a high degree of purity. The ceramic membrane reactor also separates carbon dioxide more efficiently, allowing the greenhouse gas to be easily transported and sequestered.

This is an important step on the way to making hydrogen much more practical as a fuel. The process also has a low carbon footprint.

Research is conducted at SINTEF’s facilities and laboratories in Oslo, which are co-located with the premises of CoorsTek Membrane Sciences.

The steam reforming technology used to produce hydrogen from natural gas is well known. A major problem associated with steam reforming is that the process is energy intensive and takes place in several stages. It also contains CO2 as a by-product. The new technology, on the other hand, does not require any external heat to drive the steam reforming process. One of the keys to the new process is that heat is generated automatically as hydrogen is pumped through the ceramic membrane. In this way, the heat is generated exactly where it is needed.

The smallest building block used in the new method is an electrochemical fuel cell consisting of a ceramic cylinder six centimeters long. The enlarged membrane reactor measures 4 x 40 centimeters. It is made up of 36 such cells which are connected to form a continuous electrical circuit. 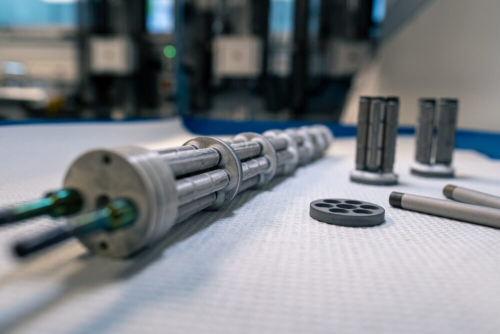 The material that connects the cells is made of a glass-ceramic which, as its name suggests, is a composite of glass and ceramic materials, such as porcelain. This material is then mixed with an electrically conductive metal powder.

According to CoorsTek Membrane Sciences, the development of this material was key to making the scaling process possible. The reactor membrane is then placed in a steel tube which keeps the gases under high pressure.

The technology behind this new ceramic membrane reactor for hydrogen production was developed by researchers from CoorsTek Membrane Sciences, the University of Oslo and the Instituto de Tecnologica Quimica in Valencia, Spain. SINTEF’s role in the project has been to test the reactors and examine how this new concept of hydrogen production can be integrated into a larger energy system.

The next stage in the development of this technology is already well underway. A pilot facility has been established at Dhahran in Saudi Arabia. The generator installed in this installation, which is five times larger than the one described in the Science paper, has also proven itself.

We are sure that this technology can still be extended. Our hope is that the first industrial installation of a commercial hydrogen production system can take place within the next two to three years.

SINTEF continues to collaborate with CoorsTek Membrane Sciences on the development of larger membrane reactors, and the two organizations are working on other materials technology related projects.

The research is funded by ENGIE, ExxonMobil, Equinor, Saudi Aramco, Shell and Total Energies. The project is also funded by Gassnova as part of the CLIMIT CO2 management research program. The research is conducted according to the Open Innovation model, whereby all project partners have full access to all data generated during the project.