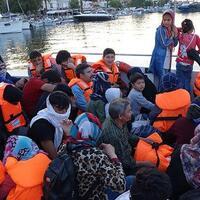 Security forces have captured nearly 160,000 irregular migrants in Turkey since the start of the year, according to data from the country’s Migration Management Directorate.

Data shows that between January and the end of December of this year, most of the irregular migrants captured were Afghan nationals at around 68,000, while the Syrians came second with 23,000. In 2019, more than 200,000 illegal migrants Afghans and 55,000 Syrian irregular migrants have been apprehended inside the country.

So far this year, 16,000 Pakistani migrants and more than 5,000 Somali irregular migrants have been captured by security forces. In addition, 3,800 people from Iraq, 3,600 Iranians and 3,200 Palestinians entered the country illegally, according to the Migration Management Directorate.

The Turkish Coast Guard said this week that loss of life has increased on the migration route, which has become more dangerous as irregular migrants have recently turned their way directly to Italy due to the pushback strategy and the policy of pressure applied by the Greek security forces. .

Turkey hosts more refugees worldwide than any other country. More than 3.7 million Syrians live in the
countries under temporary protection. This figure was 1.5 million in 2014 and has gradually increased over the years.

Between 2014 and 2021, a total of 18,000 Syrians resettled in third countries and nearly 32,000 Syrian refugees left the country under the one-to-one policy, data from the Directorate of Migration Management showed. .