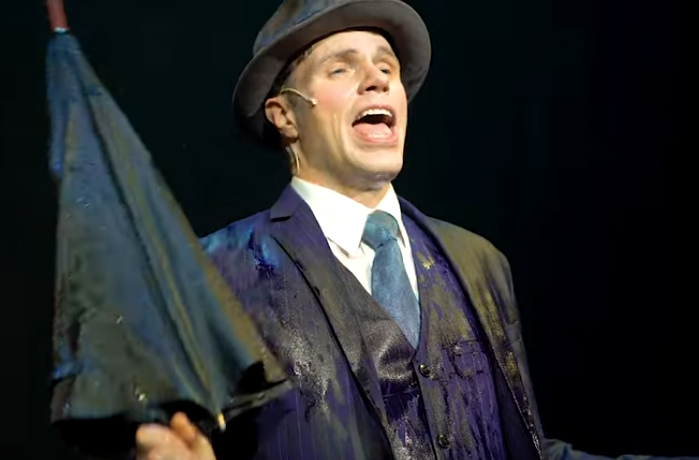 Actor Logan McKenna performs the title track and iconic tap dance number in “Singin’ in the Rain.” Production of the musical by Music Theater West began on Friday, September 16 (Image courtesy of MTW).

LOGAN – Fair warning: prepare to be totally blown away by Sing in the rain.

Music Theater West’s ongoing stage production of the classic MGM musical at the Ellen Eccles Theater is spectacular in every way.

The acting performances are superb. The singing is splendid. The costume is sensational.

And the dance? Ah, the dance in Sing in the rain is everything you hoped to see and feared not to see.

The choreography is incredible and it is performed with style, grace and boundless enthusiasm.

My hats off to everyone involved.

This piece is, of course, based on the 1952 film starring Gene Kelly, Debbie Reynolds and Donald O’Connor. As everyone knows, this film is a romance between silent film leader Don Lockwood and aspiring actress Kathy Seldon, set to music and complicated by Hollywood’s adaptation to the advent of talkies in the 1920s.

Naturally, any comparison between this stage version and the film is totally unfair. This film was grand, glitzy and glamorous as only those films from Hollywood’s golden age could be.

And who could match the athleticism of Kelly’s dancing, the comedic antics of O’Connor’s rubbery limbs, or compare to the beauty of America’s sweetheart at the ripe old age of 19?

This is a stripped down version of that storyline, with mostly minimal staging. Given this reality, this MTW production must be judged on its own merits, of which there are many.

Logan McKenna plays Lockwood. He’s suitably handsome, sings beautifully, and has all the chops needed as a dancer.

Alone on stage, with a detailed projection of the cityscape behind him and a mix of real rain and special effects, McKenna brings the house down with a charming and nostalgic performance of “Singin’ in the Rain” as the act’s finale. 1. This unique number was worth the price of admission.

McKenna is paired with Meredith Ashcraft as Hollywood newcomer Kathy Seldon. Mrs. Ashcraft is light on her feet and their blended voices make their duets and dance numbers enchantingly romantic.

The massive supporting cast is wonderfully led by Cameron Gleed as Lockwood’s trusty sidekick, Cosmo Brown. Gleed not only displays his acting and comedic talents, but also demonstrates that he can dance on walls.

But no one surpasses the sizzling Celeste Baillio in this production. She’s hilarious as Lina Lamont, a silent film star whose nails on a chalkboard voice make her unlikely to survive the switch to talking pictures.

Ms. Baillio owns Lina. She sings the fun “What’s Wrong With Me?” (a welcome addition to the musical’s score). She also dances a bit in “The Broadway Ballet” production number.

But Ms. Baillio’s real contribution to Sing in the rain brings the proverbial dumb blonde cliché to life with a performance so good you can’t take your eyes off her.

The staging of Sing in the rain is remarkable in that much of the musicals’ backstory is told in fun music videos brilliantly doctored by videographer Andy Lorimer to look like a vintage 1920s film.

As always, the music from the MTW production is performed perfectly by a 20-piece orchestra led by Jay Richards.

A matinee performance of the musical is scheduled for Saturday, September 24 at 1:30 p.m.