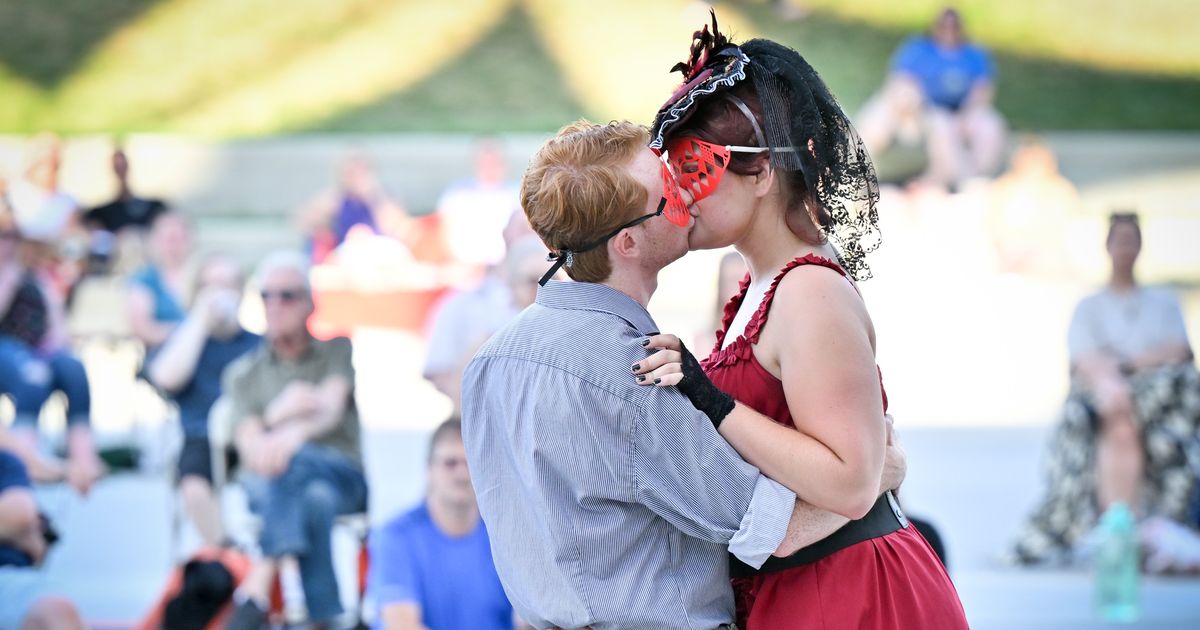 Children splashed and played in the rotating fountain, rollerbladers beat out indie rock, and the tale of two star-crossed lovers unfolded under the glass roof of the American Pavilion Thursday night at Riverfront Park.

A few hundred people of all ages, equipped with lawn chairs, blankets and snacks, gathered under the pavilion for the opening night of the Spokane Shakespeare Society’s production of “Romeo and Juliet.” The production is the first show in this summer’s Shakespeare in the Park series, which premiered last year.

Inspired by the commedia dell’arte style of early theatre, Phillips Christiansen said the show uses masks and puppets to represent the play’s peripheral characters. For example, the parents of Romeo and Juliet are represented by large white masks with clothes hanging from below, animated by the actors carrying the makeshift puppet.

“My work is done, now I can sit back and enjoy,” said Phillips Christiansen. “Oh, and play around with the soundboard a bit.”

The talent and hard work of Phillips Christiansen and his cast was evident from the opening scene. Audience members roared with delight as the show began with the first major clash between the Montagues and the Capulets, swords clanging and echoing around the pavilion.

Viewers continued to participate in the performance, laughing alongside the playful nature of Romeo and his companions Benvolio and Mercutio, and swooning over the budding love between Juliet and her shy Romeo.

Spokane residents Sonya Rose and her boyfriend, Gabe Ellzey, attended opening night with a few friends to celebrate Rose’s birthday. Ellzey said he discovered it on social media and thought it was a great way to celebrate while spending time outdoors.

“We were looking for events in Spokane and this came up,” Rose said. “It looked like something fun to do, something a little different, so we thought we’d check it out.”

In the coming years, Phillips Christiansen said he hopes the company will continue to grow and put on more productions.

After the end of “Romeo and Juliet”, the Spokane Shakespeare Society will prepare its second production of the summer, the comedy “Goodnight Desdemona (Good Morning, Juliet)”. Written by Ann-Marie McDonald, the comedy is a reinterpretation of two Shakespearean classics, “Othello” and “Romeo and Juliet.” The auditions will take place at the end of July and more information is available on the company’s website.

Until July 30, Spokanites can catch the Spokane Shakespeare Society’s production of “Romeo and Juliet” at Riverfront Park at 6:30 p.m. Thursday through Sunday.