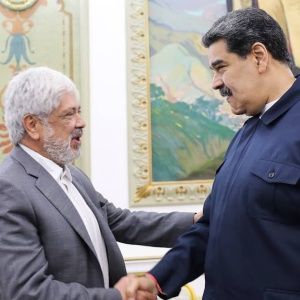 “This Thursday (September 8), the President of the Bolivarian Republic of Venezuela, Nicolás Maduro Moros, receives at the Palace of Miraflores (seat of government) the Minister of Trade, Industry and Tourism of the Republic of Colombia, Dario Umaña Mendoza, as part of the strengthening of bilateral relations between the two countries”, commented the presidential press in a note.

Umaña arrived in Caracas on September 8 to complete a work program of binational interest.

Previously, the Minister met with Vice President Delcy Rodríguez with the intention of deepening bilateral cooperation.

On Wednesday, the Venezuelan government announced that it had sealed a new diplomatic milestone with Colombia after his country’s ambassador to Bogota, Felix Plasencia, presented his credentials to President Gustavo Petro.

A week earlier, Colombia’s ambassador to Venezuela, Armando Benedetti, presented his credentials to President Nicolás Maduro during a meeting held at Miraflores Palace.

In addition, Benedetti announced that Caracas and Bogota have activated cooperation in the judicial field after three years of broken relations.

Venezuela and Colombia restored diplomatic relations after the election of Gustavo Petro (left) and, as a first step, appointed their ambassadors to these countries.

According to Benedetti, the meeting between Maduro and Petro could take place in October.

Caracas severed diplomatic ties with Bogotá in February 2019 after the opposition led by Venezuelan politician Juan Guaidó tried to enter through the border with alleged humanitarian aid, which Caracas called an attempted invasion.

Venezuela and Colombia share just over 2,200 kilometers of border, which has been closed for seven years.