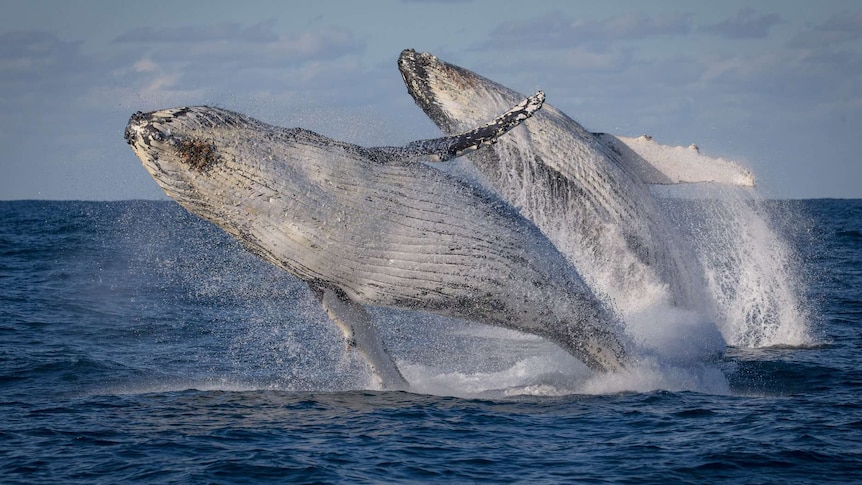 Australia’s east coast is known as the “Humpback Road” during winter and spring as whales migrate north to breed.

But experts say there has been less traffic near popular beaches this year.

Dr Olaf Meynecke, a researcher at the Griffith Center for Coastal Management, said the season has been unusual with whales staying further offshore.

“There’s a lot less going on closer to the coast.”

Dr Meynecke said the southward migration is now underway, with whales and their young making their return journey.

He said the pods were more often spotted 10 to 15 km offshore.

“We actually had less entanglements in the shark nets and those entanglements usually occur when the whales are close to shore,” he said.

“Of course, mothers and calves usually approach the shore to rest.

“But there aren’t as many as last year and certainly not as many newborns.

“It’s been a very different season.”

Are whales looking for Nemo?

Dr Maynecke said the East Australian Current (EAC) – made famous by a certain clownfish – serves as a navigation tool for migrating humpback whales.

He said this year the EAC was further offshore, which might explain why the whales were too.

Ocean analyst Lucinda Matthews of the Bureau of Meteorology said the EAC appeared to weaken along the Gold Coast in August and move slightly east.

“It is possible that the whales will now stay offshore to stay within the maximum current available to make the best southerly turn,” Ms. Matthews said.

The EAC carries hot water south from the tropics.

“It’s significantly warmer water compared to what you would find at the latitude of Sydney, for example,” Ms Matthews said.

“It is itself quite poor nutritionally, but the current generates ocean eddies and creates conditions that increase the productivity of water further south.”

The interplay between coast, current and northerly winds can generate upwellings that bring deep, cold, nutrient-rich water to the surface.

These conditions can provide feeding opportunities for migrating whales.

“Without providing the nutrition itself, it (EAC) helps pull the nutrition from where it wouldn’t otherwise come,” Ms. Matthews said.

“If you didn’t have those northerly winds, you still get steep temperature gradients just because that warm current is flowing into the surrounding colder waters.

“These thermal fronts and the current driven mixing are also very active in a biological sense.”

“What we tend to see at this time of year are all these moms and their new little babies coming to the bay,” Ms. Horner said.

“They usually hang around for four to seven days at a time.

“You see all these very close encounters with ships.

“You will look at mom’s panties, then you will watch the babies train and copy after her. It’s really cute.”

Despite the shortage of interstate tourists and changes to the whale migration route this year, tour operators are hoping for an exceptional school vacation period.

“We miss our guests from Sydney and Melbourne; we would love to welcome them here, ”said Ms. Horner.

“But we are sort of seeing strong adoption in the local market.”

Hopefully they see a lot more whales as well.