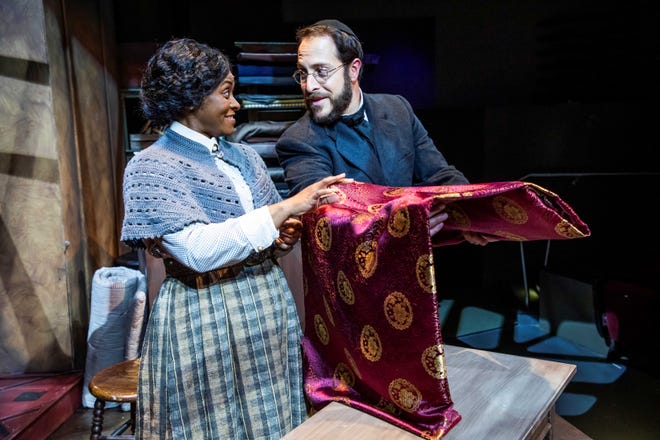 The aftermath of a woman’s desperate need for love is at the heart of Lynn Nottage’s “Intimate Apparel,” which is now getting a handsome production at the Palm Beach Dramaworks in West Palm Beach.

Set in lower Manhattan in 1905, “Intimate Apparel” centers on Esther (Rita Cole), a black seamstress who specializes in making beautiful underwear. She lives in a boarding house run by her friend, Mrs. Dickson (Gabrielle Lee).

At 35, Esther is single; she longs for love and refuses to settle down. Esther is an artist with a needle; she says she felt “like God kissed my hands the first time I ran the fabric through the sewing machine.” His clients include a wealthy white woman, Mrs. Van Buren (Gracie Winchester), and a black prostitute, Mayme (Krystal Mosley). The three women each dream of a different life but are also pragmatic about their situation.

Esther dreams of one day opening a beauty salon for black women, where they can relax and be pampered, and she has been saving up for 17 years to make that dream come true. While there is an obvious affection between Esther and Mr. Marks (Jordan Sobel), the Hasidic Jew from whom she buys fabric, she lets herself fall under the spell of George (Jovon Jacobs), a Panama Canal worker who woos Esther with letters.

Nottage based “Intimate Apparel” on her grandmother’s life and crafted an insightful story of love and feminism, driven by her skillful observations and lyrical language. Esther, Mrs. Van Buren and Mayme are all trapped by their class, race and gender in lives they are powerless to change due to the limited options for women of their time. Only Esther seems capable of realizing her dream.

As Esther, Cole delivers the kind of powerful performance that has established her as one of the most talented actresses around. Cole skillfully conveys Esther’s longing and determination in a heartbreaking and triumphant way.

The other star of the show is Brian O’Keefe’s gorgeous costume design. From the intricate corsets and other finely crafted garments that Esther creates to the beautiful period costumes in the characters’ wardrobes, O’Keefe’s designs are simply lavish.

Michael Amico’s scenic design transports the audience to 1905 and seamlessly integrates and delineates the play’s many locations. Roger Arnold’s sound design makes it easy to understand the different accents used in the show. Kirk Bookman’s lighting design enhances the mood of each location, while Be Boyd’s direction is nuanced and its staging is fluid.

“Intimate Apparel” is a timeless story of love, dreams and feminism, brought to life by poetic dialogue, a talented cast and expert design elements. It is a feast for the eyes and the soul.

If you are going to

For tickets and more information, or details on the venue’s COVID-19 protocol, call 561-514-4042 or visit PalmBeachDramaworks.org