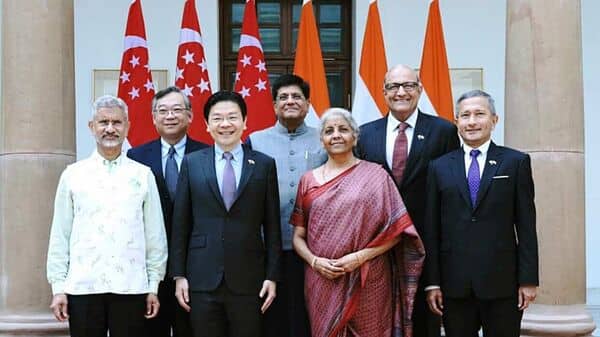 Notably, the Indian side was represented by Finance Minister Nirmala Sitharaman, External Affairs Minister S Jaishankar and Trade and Industry Minister Piyush Goyal, while the Singaporean delegation was led by its Deputy Prime Minister and Minister of Finance Lawrence Wong.

During the meeting, the leaders focused on ways to boost India-Singapore cooperation in emerging and futuristic fields, the finance ministry said in a series of tweets. “Both sides deliberated on a wide range of issues which included #financialsectoroperations, #Fintech, #regulatory #cooperation, #investmentopportunities and current economic agreements, among others,” he said in a statement. a tweet.

It is important to note that this was the first meeting of the India-Singapore Ministerial Roundtable (ISMR), a new ministerial platform between the two countries to boost economic cooperation and the ISMR seeks to deepen the existing cooperation and to identify opportunities for mutually beneficial collaboration in new and emerging areas.

Singapore’s delegation to ISMR was led by the country’s deputy prime minister, Lawrence Wong, who is also finance minister. “During the meeting, the leaders focused on ways to enhance India-Singapore cooperation in emerging and futuristic areas. The two sides deliberated on a wide range of issues including the operations of the financial sector, fintech, regulatory cooperation, investment opportunities and current economic arrangements,” Sitharaman said in tweets.

Foreign Minister Vivian Balakrishnan, Trade and Industry Minister Gan Kim Yong and Transport and Trade Relations Minister S Iswaran were part of the Singapore delegation. Jaishankar said there was a free discussion on the possibilities and prospects of our relationship in the coming decade.

“An open and free discussion on the possibilities and prospects for our relationship in the decade to come. Lots of food for thought. Look forward to our next session.” Delighted to participate in the India-Singapore Ministerial Roundtable with FM @nsitharaman & CIM @PiyushGoyal.. Our Singapore counterparts were @LawrenceWongST, @VivianBala, Trade & Industry Minister Gan Kim Yong and Transport & Trade Relations Minister S. Iswaran,” he said in tweets.

“Joined by industry leaders from India and Singapore who were hosting a side business roundtable. We appreciated their insights and insights. Refreshing our relationship is truly a shared endeavour,” he added . Lawrence Wong is in India from September 17 to 21, his first official visit to India after taking office.

According to PTI report.