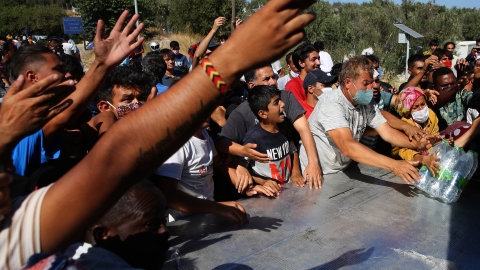 The German cabinet on Wednesday approved plans to facilitate the permanent stay of migrants with “tolerated” status in the country and their integration into the labor market.

The proposals, described in a draft document seen by AFP, apply to migrants who have been refused asylum but cannot be deported and who have lived in Germany for at least five years.

About 130,000 of these migrants will be granted an “opportunity right to stay” for one year, according to the document.

After that, if they can prove that they have a reliable source of income and a sufficient command of the German language, they will be granted official permanent residence.

“These people, who have made their life in Germany for a long period of residence, must be offered a perspective under the Residence Act and given the opportunity to obtain the necessary conditions for legal residence,” according to the document.

“Criminals remain fundamentally excluded from the right of opportunity to remain.”.

The draft law includes plans to make it easier for migrants to be recruited by family members, especially skilled workers, and to improve access to vocational and language training courses.

It also proposes measures to facilitate the deportation of criminally convicted asylum seekers.

The changes still need to be voted on by the lower and upper houses of the Bundestag and Bundesrat before becoming law.

Critics said the plans did not go far enough and accused Germany’s coalition government of watering down a promise to completely overhaul the country’s migration system.

“The objective is good and just: to give a chance to people who have so far no secure status”, said Joshua Hofert, member of the board of directors of the NGO Terre des Hommes, but “the paradigm shift announced by the coalition is not yet seen”.