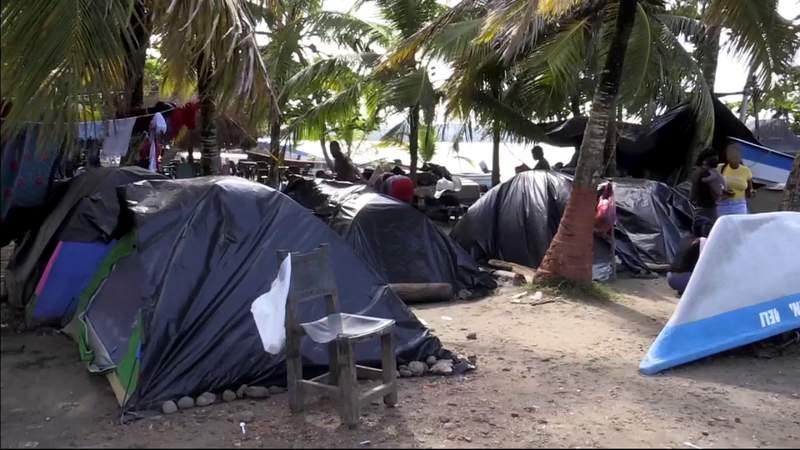 NECOCLI from Colombia – Necoclí is no longer the secluded Afro-Colombian seaside town that tourists from neighboring towns used to visit for fried fish and quiet moments in the sun.

There is a wave of Haitian migrants hoping to make it to the United States. The stopping of a smugglers route is old. Local officials say the desperation is unprecedented.

Jorge Tobón, the mayor of Necoclí, said the situation worsened after Panama started allowing only 500 Haitians to cross daily from Colombia.

“If Panama didn’t do what it is doing, we wouldn’t have this problem,” Tobón said in Spanish.

At times, the city of around 20,000 has doubled in population, leaving migrants and residents to compete for already limited resources. It is a humanitarian crisis during the coronavirus pandemic.

Some migrants have set up temporary camps under palm trees where migrants from Cuba and Venezuela are also taking refuge. Some owners prefer to rent to migrants who can pay in US dollars.

“I am looking for a better future for my three children,” said Edward Cabrera, a Venezuelan migrant en route to the United States, in Spanish.

Necoclí is a stop before a boat ride across the Gulf of Urabá. Boats cannot keep up, so migrants have to wait longer. Some migrants set up temporary informal businesses that compete with locals.

Most of the migrants are young black Haitian men, but there are pregnant women, children of all ages, and sometimes even grandparents. Many said they had recently left their families in the Caribbean country.

Besides Creole and French, some of the Haitian migrants waiting in Necoclí were also fluent in Spanish, Portuguese or English. Some have lost their jobs in Brazil, Chile or other South American countries. A few were deported from the United States and wanted to be reunited with their families.

A Haitian, who lived in Brazil, said in Portuguese that he and his wife had to pay $ 7 each per night and that they did not plan to spend $ 380 on accommodation. A Haitian who lived in Chile and traveled with a group said in Spanish that he had been waiting to cross to Panama for almost a month.

“It’s not the comfortable way,” he said, adding that he was also uncomfortable with the lack of jobs in Chile and an ongoing anti-immigrant backlash.

Those who manage to cross the Gulf of Urabá have a difficult day trekking through the Darién, a dense mountainous jungle where predators hide.

Survivors will have to brave the Chucunaque River, the longest river in Panama. It will take them months to a year to reach the US-Mexico border.

Torres contributed to this report from Miami.