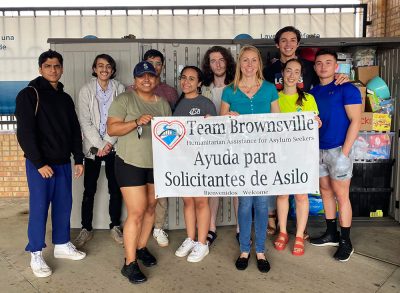 With modern technology, it’s often easy to read about issues happening in the world while remaining detached. But a group of Boston University students wanted to tackle the issues head-on and traveled to the Texas-Mexico border to witness the immigration crisis first-hand.

The students traveled as part of the Border Studies program, organized by BU’s Forced Displacement Initiative. Throughout the week-long trip, organized during spring break, the students traveled to various locations in the lower Rio Grande Valley, including Brownsville and McAllen in Texas, and Matamoros and Reynosa in Mexico.

Muhammad Zaman, co-founder of the IFD and professor of biomedical engineering, said the aim of the program was to demystify the idea that the crisis of forced displacement was limited to “low- and middle-income countries far from home “.

“It’s also an issue back home in the United States, and we kind of have a moral responsibility to understand it and think about it,” Zaman said.

The program, originally planned for the winter holidays but postponed due to COVID-19, allowed students “to observe and analyze the rich culture and complex challenges faced by migrants” and was coordinated in partnership with the Rio Valley Relief Project and Texas Refugee Services. , according to the IFD website.

The journey began with a conversation and volunteer work with the co-founders of an organization called Team Brownsville, which supports immigrants recently released from detention. The group then attended a conference at the University of Texas on immigrant mental health trauma.

Carrie Preston, IFD co-founder and professor of English and gender and sexuality studies who was on the trip, said it was important to steer clear of “virtual intensives” when taking the trip. planning for this year’s program, to allow him to “focus closer to home.”

“Through the experience of being there, talking to people in person, having the opportunity to ask questions, to observe the work firsthand rather than to get a description of it, and then to use their own bodies to help asylum seekers and migrants,” Preston said. “I think they are gaining a very different perspective on the crisis.”

During the trip, volunteer work was done at La Posada Refuge, the National Butterfly Center and LUPE, a united group of agricultural workers.

While visiting the border wall site, Preston contacted a Customs and Border Patrol agent to see if he was prepared to answer some questions, as they had been unable to schedule a conversation with officials. agents when planning the trip. The officer agreed.

“It was an opportunity that I think was really, really important because we weren’t able to get that perspective, the perspective of someone whose job it is to police the border,” she said. . “And that has improved our understanding a lot,”

Libby McClelland, a junior from the College of Arts and Sciences, joined the trip because of her interest in global health and because she wanted to go “beyond the classroom”.

“For me, one of the memorable moments was at a conference [Latino Behavioral Health Disparities in the COVID-19 Era] we attended where we heard from Dr. Luis Zayas on trauma in the migration process and family separation,” she wrote in an email. “The thing that particularly stuck in my mind was when he was talking about how he was using his research to make a difference.”

Zaman, who helped plan the program but did not participate in it, said these trips are often “really transformative” and that in previous cases students have used their experience as a “point of self-reflection”. reflection”, on the basis of their end-of-studies projects or theses.

“Generally what happens is that when the students come back, some of them are angry about the injustices and want to do something about it,” he said. “Others have a much deeper sense of their privilege and want to reflect on it.”

In discussions with organizations in Texas, such as the Humanitarian Rescue Center, McClelland said students “discovered that one opportunity for student impact could be grant writing” because they could do it remotely at their back to Boston.

“I hope to explore this possibility as I continue to work with the Initiative and as I continue to reflect and have conversations about student impact, voluntourism, and research uptake,” McClelland wrote.

Continuing to create change after the trip is difficult given the scale of the problem, Preston said, but in addition to continuing partnerships, improving the program and making donations, the initiative hopes to raise awareness.

“Many, many people in this country believe that the migrants we’ve met in shelters are illegal, you’ll hear that all the time,” Preston said. “In fact, it’s completely legal for someone to cross a border and seek asylum, which is what these migrants are trying to do.”