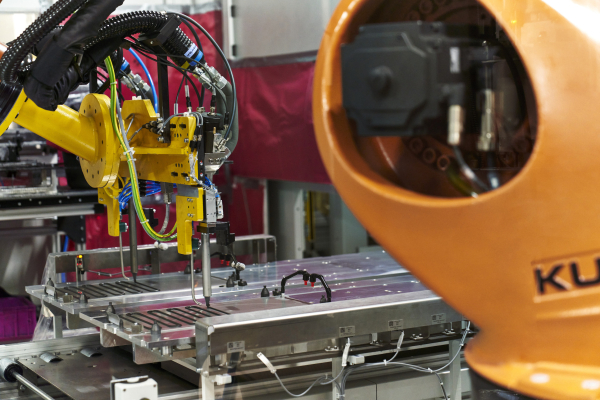 The BMW Group will increase the production capacity of electronic components at its manufacturing base in Leipzig with eight more production lines by 2024. The plant’s two existing battery module lines will be supplemented by another line and five lines cell coating. These will be followed by two new high voltage battery assembly lines which are expected to be commissioned in 2024. (Previous article.)

The battery cells they will process will be manufactured by external suppliers working to BMW Group specifications. Initially, the lithium-ion cells will be plasma cleaned before being coated with systems specially developed to ensure optimal insulation.

The cells are coated with heat-conducting paste for the production of battery modules at the BMW Group plant in Leipzig.

After being coated, the cells are assembled to form larger battery modules. In Leipzig, this is currently done on two existing module lines. A third should be commissioned in the summer of 2023.

When completed, the battery modules, connectors, control units and cooling aggregates are mounted in an aluminum enclosure. The number of modules as well as the size and shape of the housing depend on the vehicle variant in which they will be used, so that each vehicle is equipped with the most suitable high-voltage battery. Going forward, the Leipzig plant will also assemble high-voltage batteries when two designated assembly lines go into operation in 2024.

The batteries produced will power models such as the all-electric version of the MINI Countryman, which will also be built in Leipzig.

From 2013 to summer 2022, Leipzig has manufactured more than 250,000 fully electric BMW i3 vehicles and more than 20,000 BMW i8 plug-in hybrid sports cars. Both models are now discontinued. The spaces freed up and the skills of its employees will now be used to produce e-components. More than 700 production employees are already working in battery component production at the Leipzig plant, and there will be more than 1,000 by 2024.

We are constantly working to advance the transformation towards electromobility, and we continue to develop our electric motor production network to make it happen. From 2024, the entire high-voltage battery production process chain will not only operate in Dingolfing, but also in Leipzig.

Between 2020 and the end of 2024, the BMW Group will have invested more than 800 million euros in establishing the production of electronic components in Leipzig. In the future, this production area will occupy approximately 150,000 m2 on the site.

The BMW Group relies on its global production network to meet the growing need for production capacity of electric drive components. High-voltage batteries and battery components for electric vehicles from the BMW and MINI brands will not only be manufactured in Leipzig, but also in Spartanburg, USA, and Shenyang, China. At the factory in Rayong, Thailand, the production of high-voltage batteries has been localized with the support of a BMW Group partner.

Meanwhile, Munich is home to the E-Drive Pilot Plant and Battery Cell Competence Center, which performs detailed analyzes of value creation processes in battery cell production and advances relevant technologies. In the not too distant future, the BMW Group will also launch its competence center for battery cell production in Parsdorf, just outside Munich. Here, a pilot production system for near-mass manufacturing of lithium-ion battery cells will ensure that they can be mass-produced to quality, time and cost specifications.