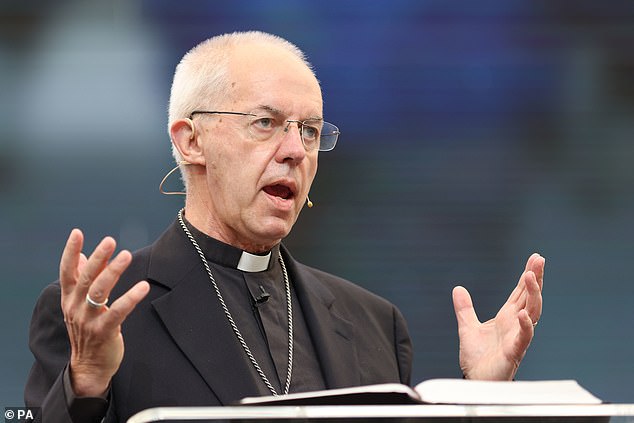 The Archbishop of Canterbury has called on Anglican bishops to speak out against the ‘unethical treatment’ of migrants and climate change.

Justin Welby urged Church of England leaders to ‘take risks’ in his latest overtly political statement and warned that doing nothing would make them ‘one of the oppressors’.

The former oil executive called climate change an ‘undeclared war’ and warned its effects could be ‘tragic beyond anything in human history’, resulting in 1.2 billion refugees .

He addressed the Lambeth Anglican Bishops’ Conference: “To be silent about the immoral treatment of migrants, about war or tyranny, about the abuse of human rights, about persecution, is to be one of the oppressors”.

It had “sometimes tempted us in the Church of England to be too close”, he remarked, adding: “Not so much currently, I believe the Cabinet and I would agree.

He claimed his organization had been “embedded” into the establishment.

It came after she criticized Priti Patel, the Home Secretary, for her asylum deal with Rwanda during her Easter sermon.

The Archbishop continued: “Climate change, better called climate catastrophe or better still, climate emergency, as we know it, is the result of the wealthiest nations having unwittingly, unknowingly and from the 19th century, waged war against God’s creation.

The haves are now throwing garbage into the seas, which is one of the signs of this battle.

“They advise the poor not to use carbon-producing fuels, and too often they tell the world, not in words but in deeds, ‘we will maintain our wealth and you poor people have to find other ways. “.

As well as stating that there are “serious ethical issues regarding the transfer of asylum seekers elsewhere”, he said that Rwanda’s idea would “not stand up to the judgment of God”.